I know it's weird to talk about a summer vegetable as winter is fast approaching, but this would be around the time that gardeners pull out the summer plants to make way for the cooler climate ones. When I tell people that you do not need to pull out your capsicums they are surprised, they are in fact a perennial and can produce year after year. This has been the second summer that my capsicums (and chilies) have grown for, with no reduction in quality or quantity, in fact I think they have gotten better, especially as they had a head start compared to if I had sown from seed.

The capsicums I currently have are Californian wonder, they were bought from the local hardware store. This is not something I would usually do, but I purchased them when we sold and re bought and our moving date was very late October, so there was no chance for me to raise seeds (considering the seeds were buried deep in out storage unit, who knows when I would have found them!) and I wanted to get my veggie patch going as quickly as possible. This year I did sow some seeds but as we were going on a one month road trip the seeds didn't get the attention I would usually give them while our house was being sat, so very few survived and they are still quite small. One has a teeny tiny capsicum on it now, but the plant should keep well for next summer! The varieties grown from seed are diggers club gilboa orange and diggers club sweet chocolate as well as a long sweet pepper variety and a small round light green variety that I acquired the seeds from from the whitehorse urban harvest.

When sowing the seeds they need warmth, so there should be very few cooler days left and no frost around. My method for feeding is quite a lazy one. I compost twice a year in Autumn and Spring and regularly apply spent chicken hay when the pen needs a clean (leaving the very soiled parts from under the roost for the compost bin) and applying worm wee when I have some or can be bothered. This seems to be enough for my veggie patches, and have had a very adundant crop from the soil (which was bought soil as we have raised beds). I do attribute this to the abundant worm life I have though as they are continually breaking down the hay and Autumn leaves that I like to spread on top. So it's kind of like a living working compost bin/worm bin veggie patch!

I have staked all my capsicums (and chilis) as I find when they fruit they get too heavy and want to lean or snap, so this helps protect the plant. I find this a very easy plant to grow, I don't need to do much and it rewards me with a brilliant harvest.

My favourite way to eat capsicum is to char the skins on the gas hob or under a griller, then remove the blackened skin. This creates a wonderful sweetness and can be eaten as it is in sandwiches or pizzas or as you would a regular capsicum.

I am linking up with Suburban Tomato so go on over and learn something new! 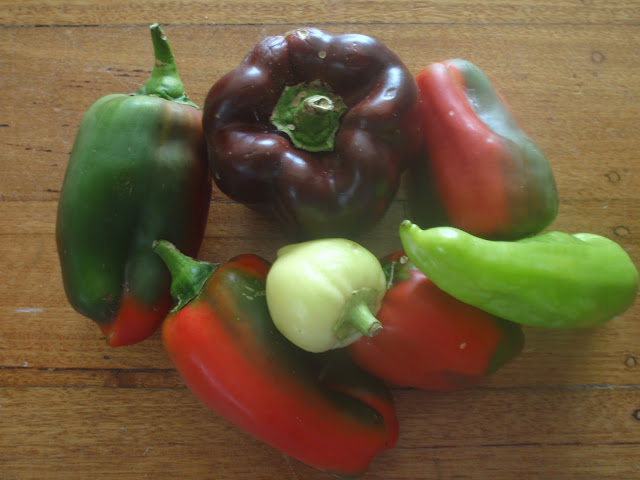 Posted by Living The Dream Homestead at 11:03